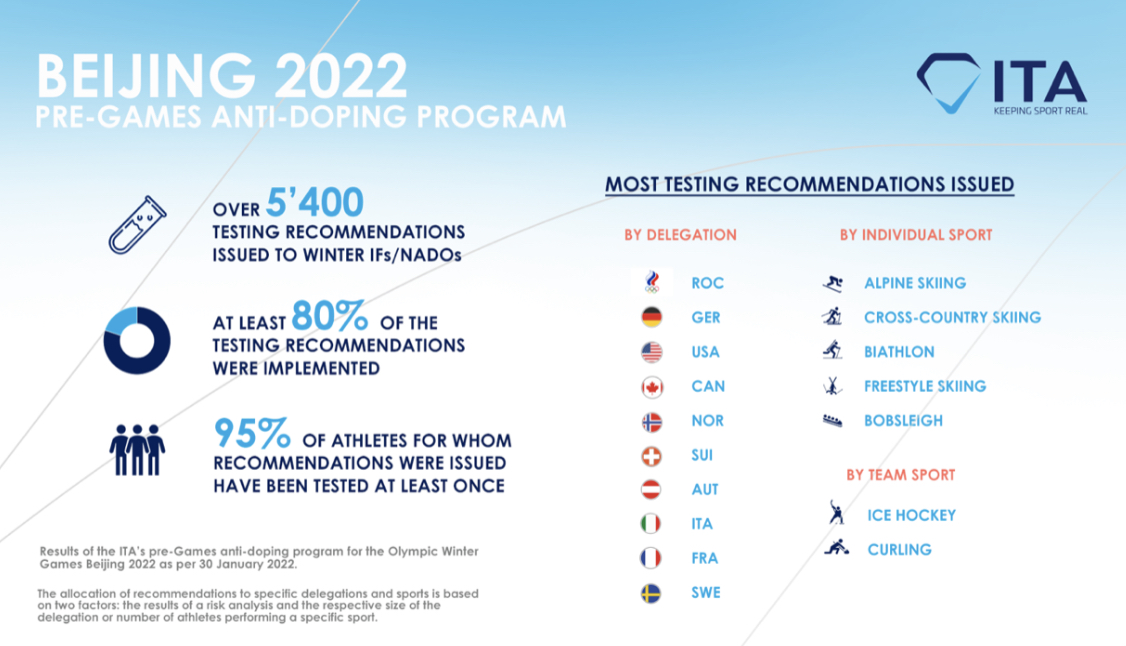 The International Testing Agency (ITA), managing an independent anti-doping program for the Olympic Winter Games Beijing 2022 on behalf of the International Olympic Committee (IOC), concludes its pre-Games anti-doping program aiming at reinforcing worldwide efforts for doping controls ahead of the Winter Games. The over 5’400 recommendations issued by the ITA Beijing 2022 Pre-Games Expert Group were implemented at a high rate of 80%.

The opening ceremony of Beijing 2022 may mark the start of the event's competitions, but anti-doping efforts to keep the Winter Games fair and clean began months before athletes travelled to China. Next to preparing for the Games-time anti-doping program, the ITA Beijing 2022 Pre-Games Expert Group consisting of independent ITA specialists, six experts from International Olympic Winter Federations (IFs) and National Anti-Doping Organisations (NADOs) as well as an athlete representative undertook an extensive risk assessment on potentially participating athletes while the Olympic Games Tokyo 2020 were still ongoing. The result of this risk assessment, over 5’400 testing recommendations for individual athletes and teams, were shared with the 7 Winter IFs and concerned NADOs in September 2021.

These recommendations supported the ongoing efforts of IFs and NADOs to make sure their athletes were subject to a robust testing program with a complementary layer of intelligence-led and targeted doping control guidance. After issuing its recommendations, the Expert Group continued to monitor the progress of the pre-Games anti-doping efforts and the implementation of the testing recommendations by the concerned anti-doping authorities – both for individual athletes and for the two Winter Olympic team sports ice hockey and curling.

“These pre-Games efforts led by the ITA in cooperation with all concerned anti-doping organisations and with the support of the World Anti-Doping Agency happen during a higher risk period for doping offences: in the run-up to the Winter Games”, says ITA Director General Benjamin Cohen. “This is why the recommendations issued by the ITA Beijing 2022 Pre-Games Expert Group offer additional independent reference on who to test to avoid as much as possible any blind spots and to work towards robust testing efforts together to ensure fair play and the protection of athletes for Beijing 2022. Any gap identified by the Expert Group in the lead up to the Games is signalled to our team on-site in China and will be integrated into our testing plan. As the ITA has already started its Games-time anti-doping program, I wish to thank all committed organisations – International Olympic Winter Federations and NADOs – for their collaboration during this first and crucial phase of the anti-doping program for Beijing 2022.”

The risk assessment that served as a basis for the recommendations considered data such as participating countries, risks and history of doping as well as testing statistics in these countries, the physiological profile of the sport, individual data of the athletes, intelligence received, and other relevant factors. The number of recommendations was also related to the size of the delegations, as countries sending more athletes to the Winter Olympics naturally received more test recommendations than countries with smaller groups of athletes.

Next to issuing testing recommendations in the lead-up to the Games, the ITA also invites with the full support of the WADA all anti-doping organisations around the world to store for free the samples they have collected in that period in ITA’s Centralised Long-Term Storage Facility (CLTSF) thanks to a dedicated IOC-fund.

The ITA calls upon all anti-doping organisations to make use of the program and store the samples they collect on Olympians under their authority at the ITA facility on a long-term basis for further analysis.