Jawo & Jarra: How we trusted the process to put Gambia on the beach volleyball map

HomeGeneral NewsJawo & Jarra: How we trusted the process to put Gambia on the beach volleyball map 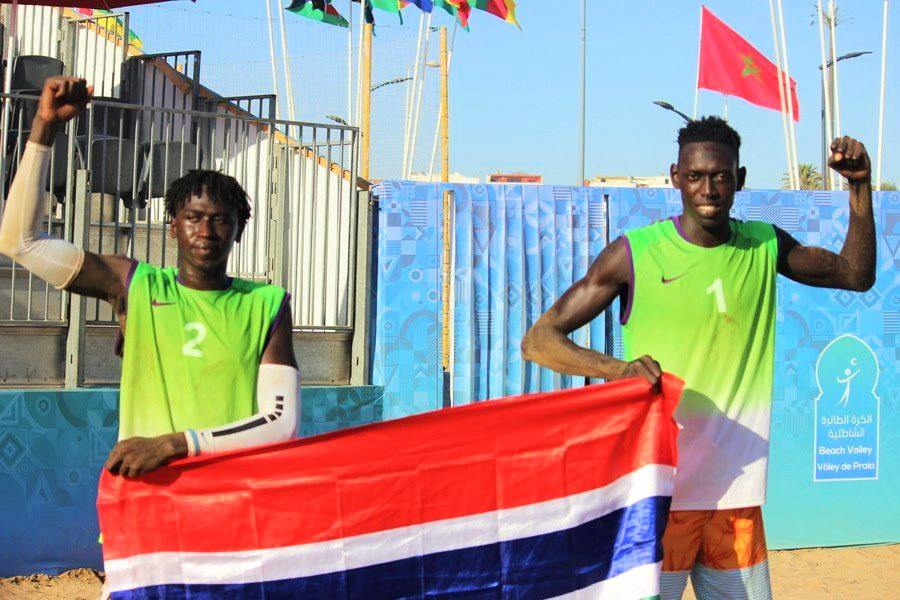 Banjul, The Gambia, March 31, 2022 – Beach volleyball in The Gambia has enjoyed a dramatic rise in the past few years and events over recent weeks indicate the small West African nation has no intention of slowing down its progress.

Leading the way have been Gambia’s top pair Sainey Jawo and Mbye Babou Jarra who have already booked their place at the, FIVB Beach Volleyball World Championships and Commonwealth Games with victory at the African Commonwealth Games qualifiers earlier this week in Ghana.

Jawo and Jarra first came to the beach volleyball world’s attention three years ago at the African Games in Morocco when they won gold after beating host 2-1. Last year they finished third at the continental cup in Agadir, failing to win the Africa slot for the delayed Tokyo Olympics.

"Everyone now knows Gambia in beach volleyball. It's on the map."

Sainey Jawo was clear that he and partner Mbye Babou Jarra would go down in the history books. The duo were the number one team in Africa when they arrived in Ghana. And now the 2019 African Games gold medalist are ready to write even more history, setting their eyes on the upcoming FIVB World Championships in  Rome.

A sensational run that took them from number 127 to 97 in the men's world rankings in just a few months, but what may seem like a quick rise was actually a long time in the making: "It didn’t start now. It started in 2017. Mentally and physically, it was not easy. It took us maybe four or five years to build this team. But we trust the process," Sainey told waiting reporters at Banjul International Airport after returning from Ghana.

“It was all the hard work, waking up at seven o’clock, going to the gym when everybody is sleeping and sacrificing a lot of things, having some ups and downs through the process. But we believed in that; we didn’t just give up. We kept pushing, our federation, my partner and I," he added.

One man behind the scenes is coach Pa Baboucarr Barrow. Barrow was unconvinced as in 2019 when he took the bold decision to invite the Qatar based stars to represent Gambia at the Rabat 2019 (African Games). It was a competition that finished on a dizzying high, as Gambia beat Morocco 2-1 at the final to win the first senior gold medal for the nation. The success of Gambia on the sand continues to dazzle from then on and Today, Jawo and Jarra carries the hopes of Gambia on their shoulders. They had become the key players in Pa Barrow’s side. In the Gambia, they are  seen as a breath of fresh air and in the gulf state of Qatar they are seen as an incredible addition to the beach volleyball environment.

The Gambian delegation returns to a hero’s welcome.  Tens of Gambians, relatives, volleyball officials, Olympic House and government officials saluted the gallant men on the foot of the plane to celebrate another sporting achievement in our history.

"This victory will very certainly breath new life" into the country’s sports, said the president of the Gambia Volleyball Federation Bai Dodou Jallow. It was inspired by "the extraordinary momentum which is leading Gambia to better days".