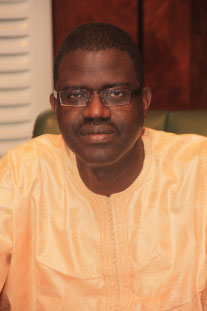 Banjul, The Gambia, March 22, 2022 - The Gambia Swimming and Aquatic Sports Association has elected Dr Njogou Lamin Bah president on Saturday 19th March 2022, during the Elective General Assembly of GSASA. The former Secretary-General and Head of Civil Service of The Gambia will  serve a mandate of four years ending in 2026, succeeding Ms Bintou Touray Huma, whose term ended after the Olympic Games 2020.

The Secretary-General of the association Mr Yorro Njie read the activity report detailing some of the achievements and activities carried out by the Association since 2019, whilst Cherno MS Jallow, the  Treasurer, gave the financial report. Congress adopted all the reports presented before them. As part of the proceeding, Congress adopted the new constitution of the GSASA, which provided a quota for women in the executive and athletes representation, respectively.

In his acceptance speech, Dr Bah thanked the delegates for their trust in electing him as their president.

"I accept this important role - a responsibility that I do not take lightly, and I promise to do my utmost best in living up to expectations," he said.

He added: Swimming has been a passion for me. It has always been my firm belief that it should be promoted and supported to yield maximum benefits to those interested, especially the youth of this country."

According to Dr Bah, his tenure as a president will focus on aligning the Association's strategic goals to FINA  and work towards reforming the Association in terms of governance, capacity building and the increase of athletes' rights and women participation.

He acknowledged that there are many challenges ahead of the new executive in promoting grassroots sports development, the lack of standard infrastructure, and the need for more qualified judges, coaches, and referees.

We will endeavour to deliver a national structure that provides an opportunity for all, whether the young child learning to swim or dive, the Olympic athlete, or the elderly using the water for health benefits," he promised.

On women's participation, Dr Bah said his leadership would strengthen the involvement of women in all critical areas of the decision making of the Association, including empowering the Women Committee of the Association through outreach and sensitization.